At Comperio we have been speculating for a while now that Elasticsearch might just drop search from their name. With Elasticsearch spearheading the expansion of search into analytics and all sorts of content and data driven applications such a change made sense to us. What the name would be we had no idea about however – ElasticStash, KibanElastic StashElasticLog – none of these really rolled of the tongue like a proper brand.

More surprising is the Elasticsearch move into the cloud space by acquiring Found. A big and heartfelt congratulations to our Norwegian colleagues from us at Comperio. Found has built and delivered an innovative and solid product and we look forward to seeing them build something even better as a part of Elastic.

Elasticsearch is renamed to Elastic, and Found is no longer just Found, but Found by Elastic. The opening keynote held by CEO Steven Shuurman and Shay Banon was a tour of triumph through the history of Elastic, detailing how the company has grown sort of in an organic, natural manner, into what it is today. Kibana and Logstash started as separate projects but were soon integrated into Elastic. Shay and Steven explained how old roadmaps for the development of Elastic included plans to create CloudES, search as a cloud service. CloudES was never created, due to all the other pressing issues. Simultaneously, the Norwegian company Found made great strides with their cloud search offering, and an acquisition became a very natural fit.

Elastic{ON} is the first conference devoted entirely to the Elastic family of products. The sessions consist on one hand of presentations by developers and employees of Elastic, on the other there is “ELK in the wild” showcasing customer use cases, including Verizon, Github, Facebook and more.

On day one the sessions about core elasticsearch, Lucene, Kibana and Logstash were of particular interest to us.

The session about “Recent developments in elasticsearch 2.0” held by Clinton Gormley and Simon Wilnauer revealed a host of interesting new features in the upcoming 2.0 release. There is a very high focus on stability, and making sure that no releases should contain bugs. To illustrate this Clinton showed graphs relating the number of lines of code compared to lines of tests, where the latter was rising sharply in the latest releases. It was also interesting to note that the number of lines of code has been reduced recently due to refactoring and other improvements to the code base.

Among interesting new features are a new “reducer” step for aggregations allowing calculations to be done on top of aggregated results and a Changes API which helps managing changes to the index. The Changes API will be central in creating other features, for example update by query, where a typical use case involves logging search results, where the changes API will allow updating  information about click activity in the same log entry as the one containing the query.

There will also be a Reindex API that simplifies the development cycle when you have to refeed an entire index because you need to change a mapping or field type.

Rashid Khan went through the motivations behind the development of Kibana 4, where support for aggregations, and making the product easier to work with and extendable really makes this into a fitting platform for creating tools for creating visualizations of data. Followed by “The Contributor’s Guide to the Kibana Galaxy” by Spencer Alger who demoed how to setup the development environment for Kibana 4 using using npm, grunt and bower- the web development standard toolset of today ( or was it yesterday?)

Logstash creator Jordan Sissel presented the new features of Logstash 1.5, and what to expect in future versions. 1.5 introduces a new plugin system, and to great relief of all windows users out there the issues regarding file locking on rolling log files have been resolved! The roadmap also aims to vastly improve the reliability of Logstash, no more losing documents in planned or unplanned outages. In addition there are plans to add event persistence and various API management tools. As a consequence of the river technology being deprecated, Logstash will take the role as document processing framework that those of us who come from FAST ESP have missed for some time now. So in effect, all rivers, (including JDBC) will be ported to Logstash.

Mark Harwood presented a novel take on optimizing index creation for aggregations in the session “Building Entity Centric Indexes”. You may have tried to run some fancy aggregations,only to have elasticsearch dying from out of memory errors. Avoiding this often takes some insight into the architecture to
structure your aggregations in the best possible manner. Mark essentially showed how to move some of the aggregation to indexing time rather than query time. The original use case was a customer who needed to know what is the average session length for the users of his website. Figuring that out involved running through the whole index, sorting by session id, picking the timestamp of the first item and subtracting from the second, a lot of operations with an enormous consumption of resources. Mark approaches the problems in a creative and mathematical manner, and it is always inspiring to attend his presentations. It will be interesting to see whether the Changes API mentioned above will deliver functionality that can be used to improve aggregated data.

Deep dive into the .NET clients with Martijn Laarman showed how to use a strongly typed language as C# with elasticsearch. Yes, it is actually possible, and it looked very good. There is a low-level client that just connects to the api where you have to to do all the parsing yourself, and a high-level client called NEST building on top of that offering a strongly typed query DSL having almost 1 to 1 mapping to the elasticsearch dsl. Particularly nifty was the covariant result handling, where you can specify the type of results you need back, considering a search result from elasticsearch can contain many types. 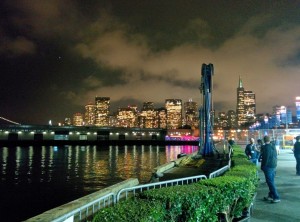