Is it possible to see which design is most credible by noting what the big, well-known advertisers do? Or are we just left with a recipe for most common solution?

These days I’m working on a project here at Comperio. A project in which I need to know how the companies we compare ourselves with presents them self visually. I decided to try something new: to let the mathematics explore the artistic feelings. 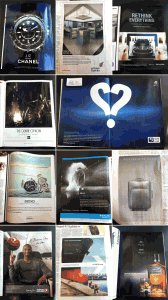 Some of the ads I quoted statistics from. Click for large version.

Our main target audience is corporate Bob (45), which is either CIO or CMO in a large company. He lives in London but works several days a month in New York. For Bob it’s important to be a modern man. He has high demands and is hard to impress. He is daily exposed to marketing that attempts to get him to change his mind about a brand, to buy a new watch or to decide to choose a technical solution over another for the business he works in.

I went out and bought two magazines and two newspapers that I reckon Bob reads on the plane to New York:

I went through these four publications, and noted statistics from 114 of the 150 ads I found. 36 of them were disqualified, either because the ad was from a too unknown sender, or because the ad clearly was not “spent time on”, or did not seem to be a part of a larger brand identity. Ads for the magazine/newspaper itself, and job listings are not included.

In addition, it may be necessary to mention that I let the ads from GQ Magazine only count for 20% compared to the three other publications. This is both because I think Bob consider GQ Magazine less “important”, but also because the GQ has five times as many ads per issue compared to the other publications. If the GQ ads had counted a hundred percent, the result would have been somewhat different, but not much.

So, let’s take a look at the statistics …

Logo color: Is the logo in plain black, a color + black and white, or has it several colors?

Logo version: Is it a dark logo on a light background, or vice versa?

Logo design: Has the logo 3D effects / gradients, or is it “flat”?

Registered logo? Has the logo a ™ or ® symbol?

Font usage: What type of font is most dominant in the ad? 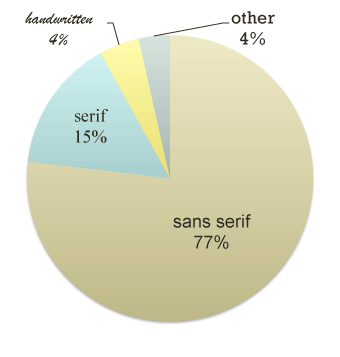 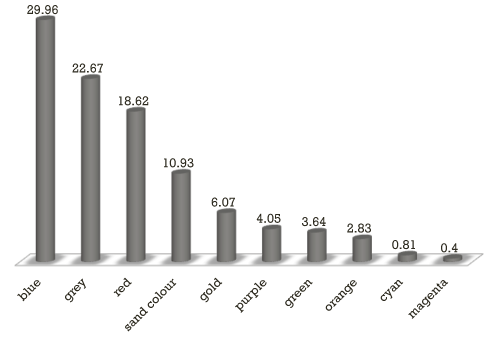 Dramatisation: How is the message of the ad dramatized? With a large picture of happy / cool people, a picture of a mobile phone, only typography … ? 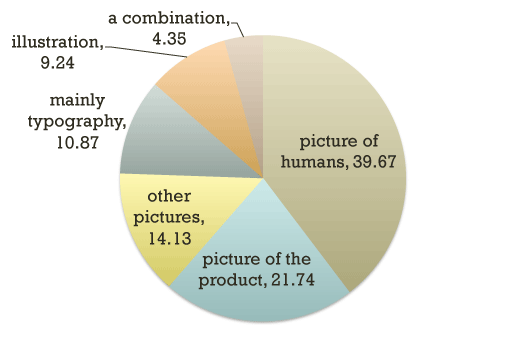 OK. And how is this useful?

To get back to where I started: Can we understand the trends based on these statistics? Yes, I think so. I think we can understand todays trends, how large international companies present their message and brand to appear as credible as possible.

However, what the figures doesn’t show is (1) the future trends, (2) the design that has the greatest credibility or (3) which of the options in the statistics that provide the greatest willingness to purchase among users.

What we concluded, and how we used the statistics … will stay our secret. But I’ll admit that we learned something new.